Boost Your Health With Mugwort

The mugwort plant is one of several species in the genus Artemisia. In Northern America, this plant is considered to be an invasive weed. The plant is very common and can be found growing on nitrogenous soils, like weedy uncultivated areas such as waste places and roadsides. The mugwort plant is a tall herbaceous perennial plant that grows from one to two meters tall and has a woody root. The leaves, which are between five to twenty centimeters in length, are dark green, pinnate, with dense hairs on the underside. The stem has a red-purplish tinge. The flowers are rather small with many yellow or dark red petals. This plant can be found flowering from July to September. 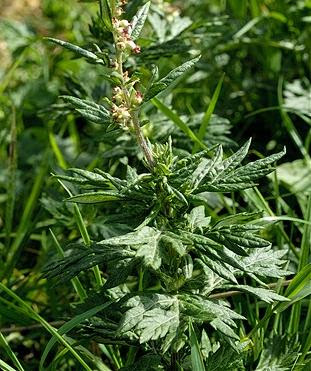 The mugwort plant is native to Europe, Asia, and northern Africa. Sometimes, it is referred to as the felon herb, St John's plant, chrysanthemum weed, and wild wormwood. The plant's root has a history of medicinal use. Mugwort was used in the ancient world as a treatment for fatigue and to guard travelers from evil sprits and wild animals. Roman soldiers are said to have placed mugwort in their sandals to keep their feet energized. One could curb fatigue by chewing mugwort leaves. Sometimes, mugwort is confused with wormwood.

Mugwort is popular in witchcraft. It is said to promote lucid dreaming and astral travel. Smoking or eating mugwort before going to sleep is supposed to make dreams much more intense. It also helps the dreamer to remember them upon waking. This herb contains wormwood oil, thujone, flavonoids, triterpenes, and coumarin derivatives. Thujone is toxic. For this reasons, expectant mothers should avoid consuming large amounts of mugwort. Due to toxicity concerns, the plant is recommended less often now.

In traditional Chinese medicine, mugwort still has a role in an aged, pulverized, and recompounded form. In this form, it is used to correct breech birth presentation. Additionally, mugwort can cause uterine contractions, so it has been used to induce abortion.

The leaves of the mugwort plant have been recommended for colic, diarrhea, constipation, stomach cramps, weak digestion, worm infestation, and persistent vomiting. This herb has also been used to stimulate the secretion of bile and gastric juices. It has also been used as a laxative, liver tonic, and sedative. Mugwort promotes circulation. Additionally, it helps with hysteria, epilepsy, convulsions in children, and menstrual problems. This herb has been used as a tonic to boost energy and strength. It has been used, combined with other ingredients, for neuroses, neurasthenia, depression, hypochondria, irritability, restlessness, insomnia, and anxiety.

In summary, the root and leaves of the mugwort plant are used to provide abortifacient and anthelminthic properties. The primary nutrients found in this herb are lipophilic flavonoids and sesquiterpene lactones. Primarily, mugwort is extremely beneficial in treating anxiety, colic, constipation, depression, diarrhea, digestion, epilepsy, hysteria, insomnia, menstrual problems, vomiting, and worms. In order to obtain the best results when supplementing with this, or any herb, it is important to consult your health care provider before beginning any regimen. For more information on the many beneficial effects provided by mugwort, please feel free to consult a representative from your local health food store with questions.

About the Author:
More information on mugwort is available at VitaNet ®, LLC Health Food Store. http://vitanetonline.com/

Are you looking for hard-to-find ingredients for home remedies? Check out my store!